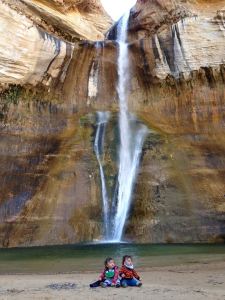 Spring is here and my wife, Kirsten, and I are poking our heads out more and looking into environmental issues. In fact, it has felt like March in Utah since early February and it is good to get out. In addition my son, Nick, has been interning for Wild Utah Project and WildEarth Guardians, both environmental agencies.  Kirsten hiked the Calf Creek Falls trail on Monday with her sister and two nephews strapped to their backs.  Nick made a run down to Moab a couple of weeks ago to visit with the Forest Service, Wild Utah Project and the Grand Canyon Trust about exotic mountain goats recently plunked down on the La Sals.

Kirsten was impressed at the amount of beaver activity in the stream along her hike.  Beaver are, of course, the original and best stream managers.  For years the folks at Grand Canyon Trust have been trying to get beaver re-introduced on Boulder Mountain and the surrounding forests.  But ranchers think beavers somehow steal water and the Garfield County Commissioners, all ranchers, wrote a letter of protest to the Forest Service vehemently protesting any beaver re-intoduction in their county.  County commissioners have amazing amount of political clout and the Forest Service folks deny them at risk of their jobs.  So Kirsten was surprised to see so much beaver activity.  She described dam after dam, wide and open and lush riparian areas big enough that migrating ducks were landing.  Our guess is that the BLM, the land managers in this case, have too much pressure from the national public at this popular spot to allow the commissioners to have their way.  Much like the forests around the Wasatch Front do not allow livestock grazing because the public would never put up with the damage.

Nick went down to Moab to visit with the Forest Service about the Utah Division of Wildlife Resources’ (DWR) introduction of mountain goats on to the La Sal Mountains last fall.  There were no mountain goats in Utah when the pioneers arrived, and all current populations in the state were transplanted from other places.  The La Sal’s have special wilderness zones established for scientists, like those at Wild Utah Project, the Grand Canyon Trust and the Forest Service, to study the effects of climate change.  Goats, as we know, eat everything and the scientists are duly concerned.  DWR is often accused of “trophy farming” and put the goats up on the mountain in defiance of current memorandums of understanding with other existing land management agencies, such as the Forest Service, in a unilateral decision to please hunters, their primary special interest constituency.

More on captured agencies and these issues as the year unfolds.