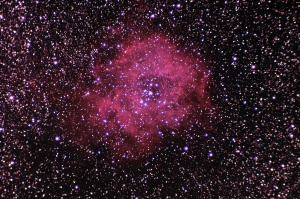 This is my first deep sky object capture in a while and the first after modifying my camera to accept more red in the Ha wavelength. This cosmic rose is about 5,000 light years away near Orion in Monoceros. The red is nebula matter (hydrogen?) that is heated up by the hot stars in the center of the Rosette which formed from the same matter. I love the feedback loop here, sort of like we mortals becoming conscious. The stars form from the cosmic matter and then shine back on it, making it beautiful. The stardust that is we humans becomes conscious and looks out on the heavens, becoming the cosmos aware of itself, and is beautiful.

I tried to get this picture Sunday night but got blanked out by a strange, stuck cloud. A rare failure in the forecast by the amazing Mr. A. Danko at ClearDarkSky.com.  As part of the weird weather we are having (very weird, exactly as predicted by the global warming models), the jet stream is distorted and was blasting down with much turbulence in the upper atmosphere out of due north and created a standing lenticular cloud exactly in the way of where I needed to observe.  Monday night was much better although it did not clear up until after dusk. Good of it. In fact, Monday night was great, clear and calm, but a surprisingly cold 24 degrees. For the first time the laptop PC I was using to run the exposures quit on me at the end of the session, apparently from cold, and would not start back up. I took it inside for half an hour, fired it up, and was able to go back out and get the rest of the compensating sub frames (darks, flats and bias).

This exposure is what the hobbyists call “first light.” I recently sent my Canon Rebel T1i off to Gary Honis for his full spectrum modification which replaces the internal stock infrared filter with a special clear glass filter. Many nebula have a red wavelength called hydrogen-alpha that is filtered out by the stock camera filter. I chose the Rosette as my first object to gather some of that red I was missing. In fact, in an attempt years ago to acquire the Rosette with my stock Canon 10D, I either missed the thing altogether, something that is entirely possible, or all the red was filtered out.

I shot through the guide-scope and guided with the normal telescope, the reverse of what is normal. The guide-scope is a relatively simple and inexpensive telescope that is not meant for astrophotography. The stars are much fatter and distorted than they would be and the little blue circles around the stars are from the various color wavelengths not converging all in the same place. Still, as long as you aren’t experienced at such efforts, the end result is purty.

This exposure is 2 hours and 32 minutes comprised of 4 minute subs and using 8 each of darks, flats and bias frames.