I recently sent this letter to my daughter, Kristen, of adventures and unexpected lessons from the observatory. 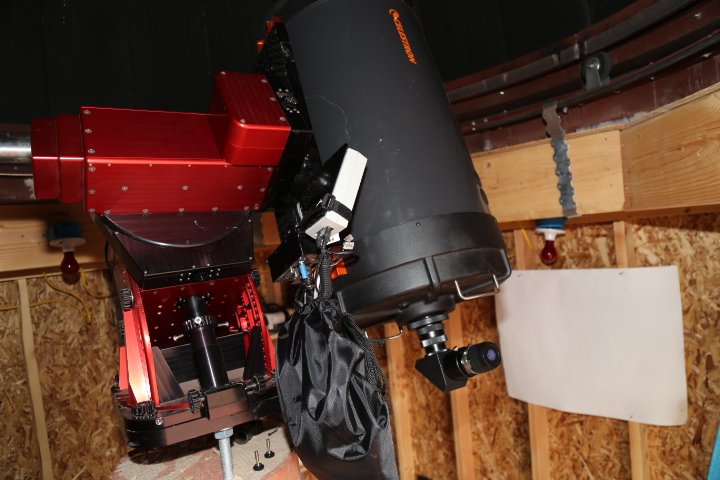 I had an experience this week that is sticking with me as a terrific little metaphor. I am the student. The thing has cast a spell. I am pondering how to take in the message.

Last Friday Kirsten [my wife] went to NYC to the annual Torrey House distributor conference and to see her dad and sister. While she was gone I scooted down to Torrey to see if I could install one of my dad’s telescopes in the observatory, one that I had not used before. It is his most powerful scope and it is a big beast. I didn’t know if I would even be able to lift it up to the mount, slightly over my head, into its dovetail fitting. I could have used help, but Torrey is far away and I have already imposed on a willing neighbor there too much. I put on some old work gloves. I hefted the thing up, got the dovetail started, but then it jammed. Before my muscles gave out I set the scope back down and waited a while. The gloves left incongruous dust prints on the pristine instrument. Throughout the day I tried 7 more times and went to bed that night thinking I should lift weights more. I thought about it and the next morning tried a new angle. On the second try I finally got it. I sat down to marvel at myself while I gave the mount the command to move to its home position. As it did so I laughed as I realized I had put the beast on upside down.

But that was not the full lesson. With practice I was getting better at getting the scope mounted and after waiting once again for muscle rebound I got it on right side up. The metaphor unfolded further that night when I realized I could not get the scope to focus. The focuser was inexplicably jammed. The scope looked in great shape. Maybe in its long storage grease had dried out or something. I searched the internet. I took apart the outward part of the focusing mechanism. I tilted the scope this way and that and gently, and then less gently, tapped and wiggled things. Nada. Around midnight I got on an astronomer’s online forum to describe my predicament.

By morning the suggestions were pouring in. The community of nerds is engaged and energetic. Meanwhile I looked up manuals and got schematics of how the scope is constructed. I tried some of the brainy nerd’s suggestions. I looked up other’s similar experiences. Nothing worked and the community just become more intrigued. They loved the problem. I posted pictures. I told them I was going to take the scope down and take it apart. Immediately I was both warned off and sent instructions on how to proceed if I did take it apart. But several sages said to wait a bit before tearing it down. Don’t rush. Nick [my son] said to slow down and see. Just wait.

As you may have the same inkling about yourself, I am a lousy waiter. I was stuck and wanted to dig in. Only with encouragement did I pause. And the problem was about to be solved. I can see now that at that point I knew everything I needed to know to solve it. But it was a forum guy’s suggestion that came first.

It is said that being stuck is a Zen thing. I remember being fascinated by that notion as it was portrayed by Robert Persig in Zen and the Art of Motorcycle Maintenance. The motorcycle sprocket has slipped. But the sprocket cover nuts are stripped. The bike is on a bridge, far from towns, there are no more tools. Without being able to remove the cover the bike goes nowhere. Might as well chuck it off the bridge. The Zen place.

The forum guy suggested that years ago Software Bisque, a company where a lot of Dad’s stuff came from, made a mod for this scope that locked down the focus mirror. As soon as I started reading forum guy’s words it all snapped together and I knew he was right. He mentioned two dust plug rubber grommets on the side of the scope that had previously barely registered in my awareness. But I knew they were there and I suddenly knew what those weird, long, T-handled hex ball-head wrenches my dad had in his stuff were. The scope wasn’t broken. In fact it was particularly capable. It was just the kind of mod my perfectionist father would make. I removed the plugs, inserted the wrench, and released the focus lock on the mirror.

The metaphor is about the magic and wisdom of waiting in the unknown. Sitting with stuck. Having faith there will be knowledge from the void. Opening my mind away from what I think the problem is and allowing for any possibility. To look at the problem with fresh, willing eyes where anything can be a clue. I could have solved this one and I was close, but I would have never waited. I would first rush to put the scope on upside down. Then I would have unnecessarily torn down the scope, potentially compromising it.

Which makes me think about conservation. About fundraising. About writing. How is my conception of these problems different from how the world really is? What knowledge do I need? What new perception?

Nick, who already knows the lesson, is listening to Zen and the Art on books on tape. Look out.

1 thought on “The Zen of stuck”