It looks like Amazon might have reported some positive earnings after the market closed last night and the stock is up $77 today or about 16%. I am trying to decide if there is a message I should be paying attention to here. Amazon, of course, is one of the major disruptors in the publishing world. Many independent bookstores went under during the recession as Amazon hit its stride selling books for below cost right while Apple came out with the smart phone and readers responded enthusiastically. But the recession is mostly over, surviving bookstores have stabilized, and Torrey House is waving a white flag and planning on converting to a nonprofit. But I still wonder if I am paying full attention. If(!) we had invested the money we poured into Torrey House into Amazon instead not only would publishing not have eaten my checkbook and my airplane, we could now have a shiny fleet of planes.  Here is the AMZN monster of a five year chart: 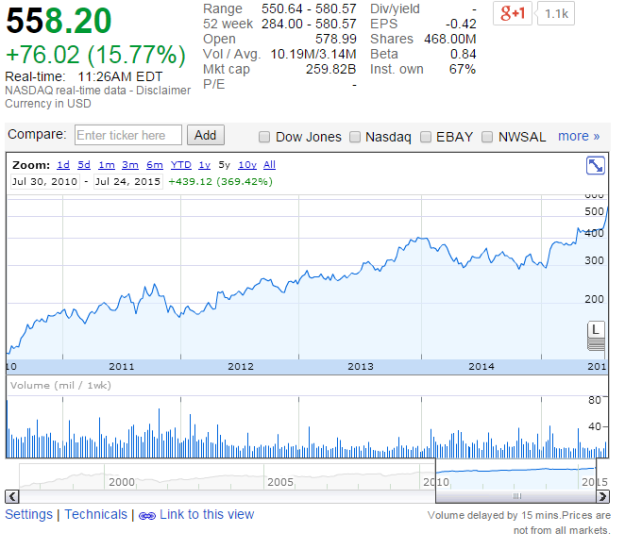 Stock up over 7X since we started THP.

What to make of that? Is Jeff Bezos a million times smarter than we are? Are we continually rushing the wrong way down a dead end street? Are publishers on the wrong side of history, particularly small presses? Should we quit now before we fall even deeper and further behind? Well. on the one hand Amazon does carry all of our titles. They don’t do anything to help sell them besides list them and they take a bruising discount, more than any other, even slightly more than the wholesalers. But they do not return books (and man oh man do the wholesalers ever make returns). On the other hand disruption hurts in multiple ways. Amazon helps readers see what everyone else is reading and drives the herd into a few best selling titles. They publish all comers via CreateSpace creating a blizzard of white noise with millions of new titles. There is more disruption to come. AMZN is not going away, at least not soon. Given how Wall Street continues to finance them with virtually unlimited free money, much to my everlasting dismay, we have just begun to see what changes Amazon will bring. Jeff Bezos is the king of the hill of corporate competitors. We cannot beat him. Yet joining him is just another form of losing.
.
Of course the world is ever changing and it appears that even though there is a growing winner take all phenomenon in the world of competition, there is a growing compensating factor in a robust nonprofit world. Three of our most admired publishing peers are in the Minneapolis area, Gray Wolf, Milkweed, and Coffee House. All three are nonprofit. And even though they presumably compete in their own backyard for funding, they are all raising a $million or two a year in contributions. Their titles are of the same high literary quality as ours and like us their experience is that book sales only cover about sixty percent of their costs. And yet they are getting award winning titles out that would never exist via Amazon alone. Donors are teaming up on the side of quality and diversity and nonprofit corporations are making the most of it.
.
Maybe even some nouveau rich AMZN investor will want to share his spoils and make a contribution.

e started Torrey House Press in 2010 with the tag line “Love of the Land” and with an objective to promote more grass on the mountains and water in the streams in the West and to do so via literature. We set out to get on the front lines of the very idea of literature and the environment. We are a publisher with a cause, to conserve the fragile environment for its own sake and upon which we depend.

Successful conservation is a challenge.  Compared to the 1960’s and 70’s there is less public interest in conservation. Driven primarily by the intense lobbying of the energy industry, it has now become a belligerent Republican policy plank to do whatever possible to undermine the environment and, sadly, this month the Republican’s overran the U.S. Senate.  What was already difficult, protecting the environment, has become more so. Energy industry money has succeeded in making conservation equate to being anti-people. Quite strange.

Like conservation, successful publishing is a challenge. Like conservation, the obstacles to success are mounting. Amazon’s growing monopsony means an ever larger slice of the revenue pie goes to them. And although Amazon makes millions of titles available, they are best at herding readers to the best sellers so that more than ever winner takes all. The growing internet produces infinite reading for free. Since the iPhone came out during the Great Recession readers are ever less available to something as demanding as a book. Smart phones and apps like FaceBook help readers find out what each other are reading which also amplifies the effect of winner takes all. People want to do what other people are doing and it is possible today to know where the buzz is in an instant. And with digital technology there is an ever increasing number of new titles per year, millions if self-published titles are included in the count, making any new title amount to a snowflake in a blizzard.

Four years in at Torrey House Press we have yet to figure out how to make our publishing venture sustainable and viable. We have learned more about the financial mechanics of publishing and what it will take to become profitable enough to continue. We see, for instance, that producing titles that sell less than 5,000 copies will never get us there. Our average copies sold per title is well less than that. We are considering our options. Help from conservation organizations might make sense. Going nonprofit might be necessary. Adding more nonfiction titles that address a specific market might help. Attracting mid-list authors with a substantial following helps. We are going to poke around at exploring all of these options and try to hold our eyes and minds open to other solutions at the same time.